I can’t believe the French word for ‘shorts’ is ‘shorts’.

You could drop me in any city or country in the world, and if there is a Borders, I will manage to find it.

I spent an hour or so yesterday at my favorite haunt, thumbing through books and magazines that I had no money or intention to buy. First off was ‘Dance’, the magazine I intend to one day write for and where this month, I am already in print! Ok, Ok, so it’s the ‘letter to the editor’ section, but mine was first and I’m pretending that if  they like my writing enough to publish my name, it can’t be that far of a step to one day be paid. Naivety or optimist, your choice.

I also grabbed a copy of Vogue, mostly because it had Meryll Streep and Penelope Cruz on the cover. I adore both of them as actresses, but I also have a girl crush on PC.  In my self-image in my head I sometimes see myself as a curvaceous sassy Latina – then I look in the mirror and see a pasty white girl with straight hair and a rather flat chest. 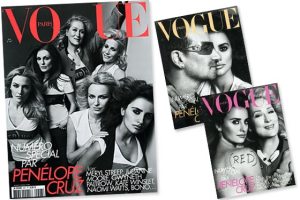 Anyways, it took me a few pages to realize, ‘Hey, this is all in French!’ Oops to me. I grabbed the Paris Vogue, but being the lazy person that I am, did not opt to switch. A picture is a picture right? I also assumed all magazines operating under the same Company contain the same content, just in a different language. Quaf quaf!

Not so. Flipping the pages, I saw multiple dance references- pictures of one of the best ballets out there (in my opinion) La Bayadere performed by the Paris Opera Ballet, and a photo shoot with successful American dancers, one being dancer Carlos Acosta who has danced with some of the best companies in the world including American Ballet Theater and Royal Ballet in London.

It was so wonderful to see dance included in fashion and art and culture since all of those things fuel each other. On to smutty American magazines which never respect the arts!

I started looking at ‘Elle’ because I admit it, I like Kristen Stewart, the terrible Twilight actress. Not in a Penelope kind of way, I just think she’s pretty and I like how she cleared her throat while presenting at the oscars which is apparently a huge no-no. I was really happy and surprised to see a short feature “How to dress the part’ by art director Joe zee. Dance was serving as an inspiration of style (it was even broken down by category of dance- for instance, jazz dancers wear leg-baring shorts, ballerinas wear flowy soft skirts) Bravo elle for trying, but as in all categories, Vogue and especially Paris vogue trumps you more than everyone on ‘The Celebrity Apprentice’ who isn’t winner Brett Michaels (Heck yes, diabetics! Now if he would only pronounce it properly- diabeteeees not diabeetus!)

in this case I don’t know who I’m more offended for; the ballerinas whose model had ‘biscuit’ feet and bad line 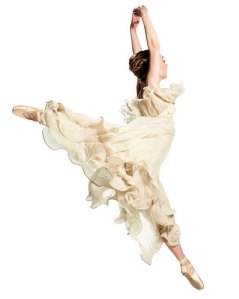 ballet fail! neither of her feet are pointed!

or the belly dancers out there- who were represented by a tummy-baring hag who looked to be as old as the tradition of belly dancing itself- in other words, not something you really want to see in a crop top. 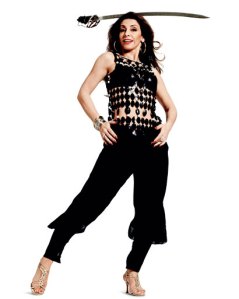 give Excalibur back to King Arthur old lady!

It’s the same as my Glee rants, I like and appreciate very much that attention is being given to dance in mainstream culture but the presentations coming out of American media anyways, are falling flat of the standards of the art. Joey on Friends said, ‘If you’re gonna do something wrong, do it right’. I concur, J-man. More importantly though, if you’re going to do something RIGHT (bringing the arts more into focus) please please do that right.

I am starting to think that I should abandon my wish to write for ‘Dance’ and begin a career as a freelance ‘dance media’ editor in which I will travel the country correcting the ugly positions of models in dance-inspired photo shoots, will find a suitable dance body double for Rachel in Glee, and basically smash all the stupid dance figurines out there that are like the models, in horribly incorrect poses. This would, of course, mean that I have almost zero ornaments left for my Christmas tree. Either that or simply move to Paris where the stereotype is culture-savvy and I wouldn’t have to deal with bad presentations of dance in magazines. I guess all I need to do now is learn the language, and I’m well on my way. Magazine content may differ from place to place but ‘shorts’ is universal.

2 thoughts on “Manger mon shorts! Dance in the French/American media”