It’s been a while since I’ve written. I’m starting up mainly because I’ve been…what’s the opposite of inspired? Anti-inspired? Seriously depressed by the quality of arts criticsm and review here in my hometown of St. Louis. The amazing company ‘Momix’ just came to town, and the review said something like ‘for serious dance fans, there wasn’t much dancing’…since we all know dancing only consists of spinning around multiple times and whacking your leg up really high. Very very disappointing. So, until I get a job writing for a real paper, I’m going to do my best to honor the people who work very hard to put beautiful shows together and the people who come to support them by writing about them here.

That being said, this is a mock review, so how well it honors the great artists of Louisville Ballet, I’m not so sure. But not everything has to be so serious. And if I can combine many things that I love, like dance, my wonderful friends and the people I’ve met through the dance world, writing, attempts at humor, and poking fun at celebrities, then I surely don’t see it as a total waste. I hope you all enjoy, as I did writing this. 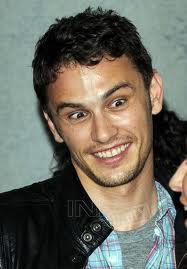 no time to sleep, I have studying to do!

I, James Franco, am hailed by many as the modern day Renaissance man, the Voltaire of my time. My many accolades include: actor, director, producer, writer, painter, model, host, scholar, and alleged stoner. I have come to realize that dancer is missing from that list. Though I may be comfortable enough with myself to model suits and perfume, I do not have the balls to wear tights- pun intended. (I learned all about humorous writing devices in creative writing classes from one of the many colleges I simultaneously attend and did NOT get in to simply because of my celebrity and chiseled cheekbones.) So, with my knowledge of the pen and my appreciation of the arts, I thought what better new hat to try than that of an arts critic? When I learned that the Louisville Ballet was doing a performance that began with a ballet excerpt centered on an opium-induced dream, I knew I had found my true artistic calling… of the week.

Being the conscientious art-lover that I am, I took my responsibilities as critic seriously and first researched the history of each piece:  The opening piece, ‘The Kingdom of the Shades’ is an excerpt from ‘La Bayadere’, choreographed by Marius Petipa and set to music by Ludwig Minkus. It was first performed by the Imperial Ballet at the Imperial Bolshoi Kamenny Theatre in St. Petersburg, Russia 1877. A scene from the ballet, known as The Kingdom of the Shades, is one of the most celebrated excerpts in all of classical ballet, and it is often extracted from the full-length work to be performed independently. (No, I don’t get all my research from Wikipedia; I have a bunch of university degrees!)  Translated, ‘La Bayadere’ means ‘the Temple Dancer/Maiden’ and basically what happens over 4 acts is: the temple maiden, Nikiya, and a warrior named Solor are in love, but the Rajah wants Solor to marry his daughter, Gamzatti, and the High Brahmin wants Nikiya for himself. So he causes trouble by telling the Rajah that Nikiya and Solor have already sworn their love to each other in an attempt to get the Rajah really pissed off at Solor, but he decides that Nikiya is the one who should die. Gamzatti overhears and tries to get Nikiya to just give him up, but Nikiya is stubborn and a little crazy-town and tries to stab Gamzatti. So then Gamzatti sides with Daddy Rajah and agrees that b*tch must die. So they send her a basket of flowers concealing a big @ss snake that bites her. She is offered the antidote by the High Brahmin, but again, girlfriend is stubborn and doesn’t want to compromise her little life plan without Solor so die she does. This makes Solor pretty upset and he spends the next act smoking opium and dreaming of being with Nikiya and her spirit in what is known as ‘the kingdom of the shades’.

I prefer a method approach to acting as I also do with critique. No, this does not mean I chose to attempt to understand the real vigor of this incredibly challenging and thankless choreography by trying it myself. Who do you think I am, Natalie Portman? Also, if I were to attempt to be one of the ‘Shades’- or the large corps de ballet/chorus in this classic ‘White Ballet’ (known for a bunch of ladies in white costumes, like ‘Swan Lake’ or ‘Giselle’) I would have to balance on one leg for long periods of time, and I’m not known for being able to stand still. And the stuff the two leads, Nikiya and Solor, do looks way too hard. So I methodically searched out L-ville until I found some laced-up mint juleps and some pot (allegedly!) from some homeless guy near slugger field.

I don’t know what was going on with this stuff I got, but it really messed me up and gave me serious déjà vu. I swear I saw the same girl multiplying and doing the same thing over and over, gradually getting closer and closer to me..coming to get me! It was starting to feel like a scary drawn-out  trip until the leads came out and made the rest of the shades stand still. Christy Corbitt Miller and Robert Dunbar were a stunning lead couple, each bringing skill to the dancing and passion to their characters. CCM was as ethereal as a dream within a dream, like a ballet version of ‘inception’. Also delightful were the three soloist ‘Shades’; Rachel Cahayla-Wynne  satisfied my hunger for beautiful jumps and extension, if not by hunger for some cheetos or taco bell. Seriously, why don’t they sell that in the lobby? Soloist Yuki Komazaki was not only a glimmering bright spot of ballet but also brought such a lovely presence to her performance that one might swear that dancers can actually act as well as actors..But if that were true then body double for Portman in ‘Black Swan’- Sarah Lane- might have at least received proper credit for her contributions to the movie. The third soloist- Emily Reinking O’Dell- had probably the longest and most beautiful legs of anyone I’ve ever seen. But then, I was squinting a lot. Between the two leads, soloists, and scary clone-girl (or corps de ballet) ‘Kingdom of the Shades’ was as much a treat to see as the entire Derby Pie I then munched down during intermission.

Next up was ‘Troy game’- a piece choreographed by Robert North in 1974, set to music by Bob Downes. This was my kind of work. The all-male cast perfectly show-cased their strength, stamina, acrobatics, and sense of humor in this playful, nonstop, athletic piece- all qualities which I see in myself. I could probably do that. Also nicely showcased were the men’s bodies in the skimpy yet colorful costumes. Not that I noticed.

Last on the bill was ‘Rite of Spring’, debuted on the Louisville Ballet by choreographer Adam Hougland in 2009, set to the classic Stravinsky score, or as I like to call it, the ‘dinosaur music’ from Disney’s ‘Fantasia’. After careful and in-depth research, I learned that the original piece was choreographed by Vaslav Nijinsky and is about the pagan practice of sacrificing a young virgin to appease the Gods. If you think the Disney version is scary, look out! I find a T-rex frightening enough (depending on what you’re smoking- allegedly!) but the primitive yet sophisticated music and movement felt like both a thrilling and dark visual experience and also the worst trip ever. The sometimes smoothly undulating, then striking and thrashing movement is complemented perfectly with the percussive and dissonant score. Lead dancer Kateryna Sellers might not be my choice to sacrifice, I’d prefer to throw, say fellow co-host Anne Hathaway- to the greater good but that’s me.

The show overall was like watching man’s descent from Heaven- with the ethereal and perfect beauty of ‘Kingdom of the Shades’, to a nice view of Earth and the high-impact intensity of humanity in ‘Troy Game’, to a glimpse into Hell with ‘Rite of Spring’. What with the graying dirty-looking costumes and their inhuman movement and lack of emotion, the dancers looked more like the angry mutants from that will Smith movie, ‘I am Legend’ than the same women who looked so angelic as shades, and the men who looked so vivacious in ‘troy Game’.  Then there is the issue of the sacrifice for the good of the rest of the community; while Sellers as ‘the chosen’ did manage to command the stage every second that she was on it, her defeat didn’t seem to make the rain stop falling on the stage. I wonder if that’s the problem with all the natural disasters happening everywhere- I guess Japan isn’t sacrificing the right virgins.

The show left me feeling a bit dazed and confused- the terrifying and unballetic ‘Rite of Spring’ was an odd note to end a show on, especially since it was such a lovely spring day outside. Most of us want a happy ending, but Louisville Ballet has the vision, courage, and talent to do things their own way, to expose audiences to both the traditional beauty of dance and the limitless possibilities of both imagination and physical capabilities. Seeing the show managed to capture even my imagination and spark a fascination with dance that I may turn into yet another meaningful, and not pointlessly expensive and stupid degree plan. Upon further study, I noticed that many of the dancers seemed to hail from one school in particular. I will be applying to Butler University in the fall for their Department of Dance. Don’t look for me in the studios though; I’ll probably manage to graduate early, after only about a year or so of study, since we know from Natalie Portman, that’s about how long it takes to make a dancer. 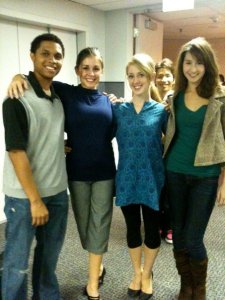 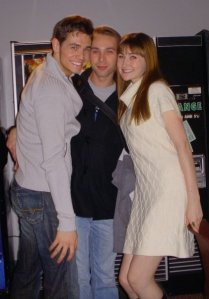 Update as of 4/30/2011: PROOF THAT I AM PSYCHIC! JAMES FRANCO IS NOW PURSUING A  PhD IN CREATIVE WRITING FROM THE UNIVERSITY OF HOUSTON. I HOPE HE DOESN’T PLAGARIZE AND COPY/PASTE THIS ARTICLE AND HAND IT IN TO HIS TEACHERS. NO ONE WOULD BELIEVE HE COULD WRITE ANYTHING SO INSIGHTFUL… ALSO, IS HE AWARE THAT YOU CAN GET MULTIPLE DEGREES FROM ONE SINGLE UNIVERSITY? MY GUESS IS THAT HE’S JUST TRYING TO PICK UP AS MANY CHICKS AS POSSIBLE, SINCE I JUST CAN’T BELIEVE THAT ANYONE BORN WITH GOOD LOOKS EVER WANTS TO DO ANYTHING ACTIVE WITH THEIR BRAIN…LIKE WRITE A DANCE BLOG