What to expect when you’re expecting: Taxes, Death, and Plies

Happy day after tax day to all- we survived another year of (half of) the quotable equation : Death and Taxes, the only things that can be relied on in life.

It seems to me that I can rely on a little more than that- just as I know taxes will come every year, I know that plies will come in the beginning of every ballet class. As surely as death will get me eventually (unless I voldemort myself and make a horcrux) I know that every day of my life from now until that fateful event will include insulin (the liquid-gold/ medication that I as a type one diabetic, need to stabilize and maintain a normal blood sugar level).

It’s funny to me, the amount of similarity that three of these common occurrences play in my life. Taxes are awful to fill out, especially if you, like me, have to do them for multiple states, claim tips, or do them for multiple companies. Luckily, I tend to be one of those cautious people when filling out a W-4 who asks to have the maximum withheld so that once tax season rolls around, I usually get a nice payback. So it’s really a gift in disguise- an annoying disguise of a long string of paperwork.   Insulin and plies are sort of the same. To explain for anyone who doesn’t know- a plie is a warm-up step done in the beginning of ballet, jazz, and modern classes. It means ‘to bend’ and is done in a variety of positions (in parallel, 1rst position: with the feet turned out and heels touching- are examples) simply put, you stand and bend your knees. Done! But there’s a lot more really going on than that- a plie is a stretch for your calves and achilles, it helps a dancer lengthen the back, drop the tailbone, activate the abdominals and rotator muscles, and find their center of gravity on the ball of the feet without gripping the ankles…or in many cases, awaken the body in the morning since the combinations tend to follow similar and predictable patterns and dancers can put the brain on auto-pilot and focus on alignment and stretching. A plie is used as a preparation for turns, the beginning and end of jumps, and is pretty essential to technique, so while it’s not the most fun of dance steps- doing them- and doing them correctly- is important. Not that the IRS will come get you if you let your heels life off the floor, but your teacher might.

A lot of people don’t understand the role of insulin for diabetics and that is o.k.- I didn’t know a thing about it until I had a doctor telling me I was going to need it forever. To explain- a type one diabetic does not produce the insulin in the pancreas- what insulin does is basically act as a key to the cells, allowing the nutrition from food to be absorbed. Without insulin, the cells stay ‘locked’ and sugars spill into the bloodstream- hence a ‘high’ blood sugar and a need for a shot of insulin. A fear for diabetics, or people with hypoglycemia, is the opposite, a ‘low blood sugar’ which occurs when there is too much insulin and not enough sugars.  So that’s the science lesson for the day- put in terrible layman’s terms for everyone to understand and because even after nine years of this, I’m still a little bad at explaining it. What I have to do as a diabetic is take a basal type of insulin once a day (called lantus) that keeps me at a stable level for 24 hours, and then whenever I eat (anything from carrots to cake- there a much fewer restrictions now with insulin advancements!) I take a shot of a different type of fast-acting insulin (called novalog or humalog) based on the carbohydrate and protein count of whatever I eat. My point is that without insulin, I wouldn’t be able to eat. I flat out wouldn’t be alive. So even though I do NOT enjoy taking multiple daily injections with no end of this process in sight, I know that insulin is huge blessing, allowing me to live my life, as plies get me ready to dance, and taxes….well, document my functionality, if nothing else.  At this point, I know how much pain to expect from a shot, what joints will pop in a plie, and can predict how many forms I’ll need to fill out for taxes, but I still slightly dread these occurrences every time I face them.

The shoes put on each time
left first, then right.

The morning potion’s teaspoon
of sweetness stirred always
for seven circlings� no fewer, no more�
into the cracked blue cup.

Touching the pocket for wallet,
for keys,
before closing the door.

How did we come
to believe these small rituals’ promise,
that we are today the selves we yesterday knew,
tomorrow will be?

Routine is a curious thing- I find myself a creature of habit in weird ways. I noticed the other day how my morning routine has stayed pretty consistent spanning  my college days in Indianapolis, my year in Louisville, my time in New Jersey, and back in St. Louis (new York was an exception, nothing was consistent there for me except dehydration and outrage towards prices of just about everything). I like getting up early, I do about ten minutes of the same yoga stretches, then I make coffee- always with milk- eat either yogurt, or if I’m out of that, toast- then check my blood sugar, take my insulin, and sit down at my computer to check my email, then put my hair up in a bun and go to dance. You would think the monotony would kill me but I really love the morning. I think a big part of that has to do with the optimism of the upcoming day, of how productive I plan to be (and am usually not) and because even in my times of not taking good care of myself, I have in all these separate locations, been heading off to dance and have been able to follow through on a healthy meal plan and taking a full dose of insulin. Mornings, in all their routine glory, are the times when I feel safe and never worry about how I’m going to screw up my own life with bad decisions.

I’m working on a choreographic work called ‘The type one project’ based on the everyday life, hassles, and hopes of people living with type one diabetes. I began by recording interviews with about twelve diabetics ranging in age from 6 to 60. I then combed through the recordings to pull connected material on the subjects of everyday hassles, fears, how it effects childhood, relationships, shots, and future wishes and mixed the separate interviews for tracks in these topics (when I say, I mean, my very patient and amazing Dad, while I barked orders- thanks Dad!) I was surprised to learn that the collective and most brought up aspect of everyday hassle was how much preparation and planning it takes all the time to manage diabetes. We have to plan the right amount of supplies to carry around with us, the amount of food we’ll need based on exercise, or when we have breaks in our schedule to eat and how the amount of time between meals will affect our blood sugar level..and don’t even get me started on how stress, or a basic cold, and a million other factors mess up blood sugar! It really stinks having to put so much mental effort into staying healthy everyday and in that sense, having some routine is a nice break. Knowing what to expect and how to deal with it means that you don’t have to think as much. I was going to put a sample of the track up, but you have to pay about 20 bucks for a ‘space upgrade’ to include mpeg files (wow, I sound like such a techie!)

I kind of hate the idea of living my life with cookie-cutter days, one just passing down the assembly line of my fast-ending youth (fare-thee-well being on my parent’s health insurance in less than two years. Noooo!) But routines don’t seem safe to rely on either- my life was going just fine and then I suddenly had to incorporate shots into my day-to-day. Even today in class, I noticed a new pain in my left knee during plies, and I’ve never had knee problems before so I’m not sure if I should ice it or skip grand-plies for a while until it feels better. It seems like even the most worn-out routines are forced into change at some point or another, and you’re stuck with figuring out how to deal. Free will sometimes scares me senseless- it feels like a lot of accountability to myself….on myself (brilliantly stated, philosopher Jess, they’ll be quoting that one for the ages)

It seems that besides taxes, oncoming, death, and insulin, there is no stopping aging, and therefore changing into my decrepit almost 25 year old physical self and very-wise, grumpy old person mental age- or immature child, given the circumstances. It’s hard to tell at this point in my life when I want the expected, or routine, and when I wouldn’t rather do or be something completely different from everything I’ve come to know.

(Proof that a selective very few things never change: Then and Now: picture a) the WORST picture ever of me, my brother Dan, and my cousins Matt and Patrick in about 1997? I think I’m ten. B)

Another horrible picture of us (attempting to recreate the original, yes I AM making that face on purpose) at my grandma’s 90th bday dinner last weekend. I’m clearly a winner with those high-waisted jeans, BOYS ballet shoes, and glasses that I drew on myself with glitter glue. And of course, that facial expression. I think my brother’s look (in the first one!) says it all. I guess no matter what happens for me, if I keep dancing, or become a famous writer, or a trophy wife, or a bum, I’ll always be the same weirdo girl. My friend Stirling summed it up perfectly after seeing pictures of us from a college party: “Jess, you’re a facial contortionist. You take a perfectly good face, and you do THIS with it”. Is it any wonder I’m afraid of my own choices?) 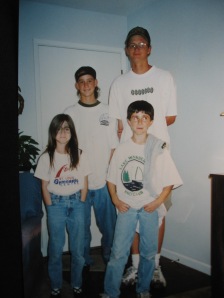 2 thoughts on “What to expect when you’re expecting: Taxes, Death, and Plies”