The Art of Entertaining– by Jessica Ruhlin

There isn’t much to say about Stomp, at least that hasn’t been said already. Trust me; I looked at other reviews to ensure that I didn’t just parrot the New York Times and every other publication that has seen this performing group. All of the descriptions, ‘a visual and audio feast, an engaging experience that lies somewhere between choreography, composition, and comedy’, there they were (barely legible) in my notebook too. How disappointing for me, that I didn’t seem to feel anything profoundly different from all of the other so-called critics of art out there. I suppose with a show like Stomp, you go in knowing kind-of what you’re going to get. 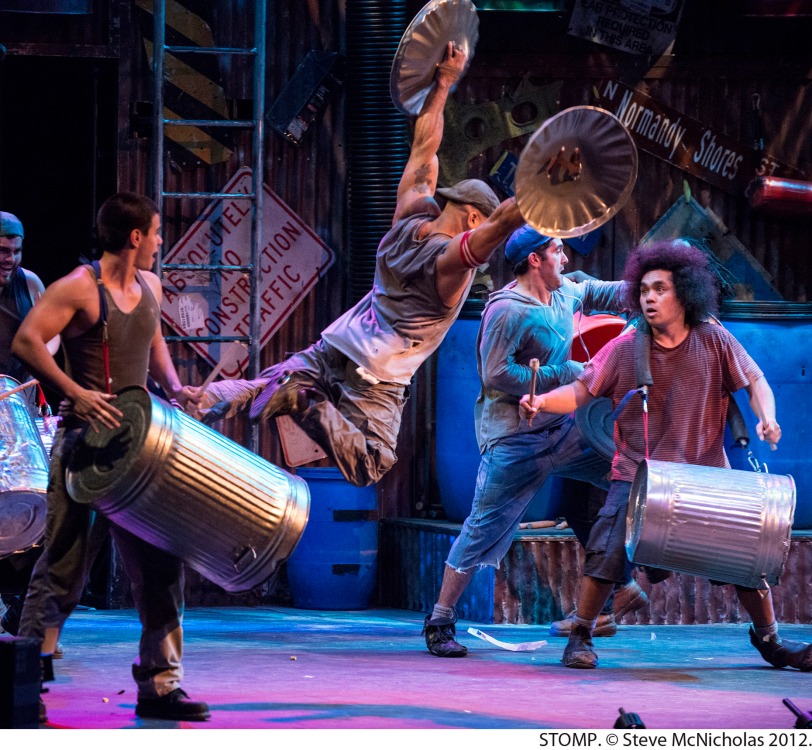 I’ve often heard the difference between art and entertainment explained as thus, “entertainment is an escape while art is a challenge or a question”. Stomp is a show that doesn’t necessarily ask you to think, to confront existing perspectives or deeply-buried emotions. This may be due to the pacing of the show, the quick slip into a spectacle of music, movement, and personality with no time to wonder, ‘how did they come up with that’ but simply to say ‘how cool that they came up with that’.

Throughout the course of the show directed by Luke Cresswell and Steve McNicholas, the performers put their incredible talents on display with the aid of brooms, pipes, trash bags, basketballs, kitchen sinks, floats, shopping carts, lighters, and a variety of more conventional percussion instruments. They use all kinds of things that one might look at as a piece of junk and turn it into a tool for art. The performers are different heights, weights, races, sexes- there isn’t a recognizable ‘look’ to them. To be honest, I thought the first performer out on stage was part of the crew due in part to his unassuming entrance and because he was pushing a broom. The show is at one moment a rhythmic execution of household chores, then a conversation, a competition between the players, a battle, a shopping excursion, a lesson from performer to the audience, then an explosion of organized sound delivered by incredible individuals.

The difference between this and most performances that I see was that the dance and movement seemed to come from the creation of the music, rather than the two existing separately and being jammed together. As a dancer, I was personally stunned by the physicality of these musicians-comedians-athletes. Of course the hand-eye coordination is stunning, but they showed strength in how quickly they can change direction or get up from the floor- particularly with the trash can lids- or travel along the floor in a crouched position. That looked like a killer on the quadriceps. One female had especially impressive flexibility while the other managed to throw in a few pirouettes and turns in a la second. You would have to have a really strong stomach and core to hinge backwards and continue to play the way that did while sitting on the circular floats. I’m also not sure how they can play with such strength and agility while hanging suspended off the set piece without a solid floor to ground them. They have the strength of traditional Taiko drummers but do it all while poking fun at each other and seemingly, having fun themselves.

These people look like they come from all different backgrounds of training and experience. The show seemed to touch on elements of tap, step, hip hop, martial arts, and circus arts, appropriate to each performer. The uniqueness that they bring is fantastic, allowing for character development without a word spoken. They all had their own style- from personality to physicality. Even in unified rhythms, the way that one is loose with the upper body another aggressive, one hovering barely an inch off the floor in jumps while the other pulls his or her feet up as if it was on fire, added even further visual diversity amongst a codified and invigorating sound.

It seems that the so-called experts often chastise entertainment as the stuff that preys upon our weak palettes as humans. The same way that the sugars and fat found in junk food produces a chemical reaction in our brains, perhaps there is something about entertainment that triggers the pleasure neurons that can’t distinguish between what is ‘good’ or ‘bad’ for us. Entertainment doesn’t leave room for a difference of opinion while Art is subjective.  Art is supposed to be good for you while entertainment is not; art transcends humanity into the realm of the divine. Watch Stomp take the basic human anatomy and a paper bag and do the same. In the face of staggering creativity, Stomp is indeed subjective. The performance offers so much that you have to ask yourself and your fellow audience members, ‘which part did you like best and why?’ I personally loved the section with the lighters, showing that it can take so little beyond a shared language of rhythm, creativity, and a lot of organization to make something truly stunning. I especially liked this piece as it followed the incredibly extravagant number in which the performers repelled, swung, and jumped from the rafters of the set piece. They were so fearless, particularly the girl on the left when she…..well, I don’t want to spoil it.

There exists this elitist attitude sometimes towards art and performance; that it isn’t for everyone, it requires a sophisticated palette in turning away from easy answers in order to look for a deeper meaning. Perhaps that is how Stomp is so incredibly artistic; it leaves space for everyone to have their own personal, subjective reaction, to pick a favorite movement or performer. Because it is popular doesn’t mean that it isn’t art. Stomp in fact bridges the gap between the two, offering an experience from true artists posing as entertainers. The beauty lies not only in the collected sounds and shapes of these diverse performers but in the unified response of the assorted audience at the close of the show; all of us on our feet, offering up a storm of applause, sharing collective appreciation in our own time.

Go see it for yourself and decide what and who you like best. Information on remaining show times and tickets at the Fabulous Fox Theatre here.