The weekend of January 23, 24th saw the return of New York based company, Doug Varone and Dancers, to the Edison Theater. The Edison  was, in fact, the first contracted booking outside of the New York area for the group. Started in 1986 (hey, that’s when I was born!) the 28 year-old company appears on concert stages, in opera, theater, and on-screen. Doug Varone’s work is known for its multi-disciplinary approach, emphasizing the importance of concept, imagery, technical elements such as lighting and intricacy of music. Friday and Saturday at the Edison offered two entirely different programs, showcasing a consistent excellence in an incredibly diverse array of audience experiences. 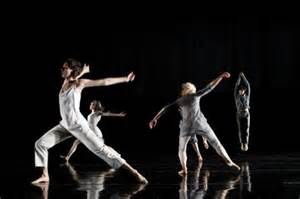 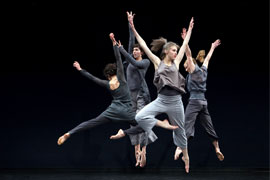 Friday’s program, entitled, ‘Stripped/Dressed’ offered an inside look at how the company creates work from conception through rehearsal and finally into full production. The first half began with the Artistic Director and choreographer, Doug Varone himself, coming onstage and introducing himself and his dancers, dressed in an array of loose and colorful track suit pants, t-shirts, tank tops, or leggings. The company showed excerpts of a variety of pieces including ‘Lux’– a fast-paced consistent thread of momentum-based movement set to a Phillip Glass score- and ‘Aperture’– a trio set to a gorgeous Schubert piece emphasizing the importance of lighting and idea. The dancers began clustered in a circle of light, gradually stretching the spacing. A purpose of this piece, as explained by Varone, was to explore the question, ‘what would happen if an image was unstuck?’

Also in the program was an entirely new creation made before our eyes with audience participation. Varone showed how he collaborates with his dancers- having them first make a shape- and then responding to the architecture from one pose to create a thread of action. He even allowed the audience to make suggestions, such as “make Hollis lift Julia“. Once he, the dancers, and the audience together had created a string of movements, the short phrase was shown with three different pieces of music, the first a serious Nordish-sounding piece, the second, classical, which somehow seemed to juxtapose the playful nature of the piece, and finally, ‘Animal’ by Maroon 5,. The last piece, probably included for laughs, did indeed show how diverse choreography can be within the context of music, as the ground work did make the dancers seem more animalistic than the same movement had come across without Adam Levine’s nasal tones.

Concluding the first half was a demonstration of the thought process behind the piece that we would see after Intermission with full costumes and lighting, ‘Boats Leaving’. Varone described how he went into the studio after being commissioned for a new work with a copy of The New York Times and had the dancers recreate pictures of people and situations from the magazine. At one moment they were soldiers, then politicians, then prostitutes, then children. The piece began taking shape as they moved from one grouping to the next, interacting with or ignoring each other, moving away from the narrative that had inspired these images and instead creating new stores and dynamics.

Returning after intermission, ‘Boats Leaving’ was performed with all of the technical elements and in its full inception. It was strange and beautiful to know that a process had existed behind the work that somehow didn’t seem to leave much trace within the work. Also incredible was seeing how much thought had gone into just a very small two minutes or so of a large work. As much as it is interesting to see and hear about the original creation of the work, it would have been intricate and fascinating without any back story.

The piece included long poses, like seeing the picture in a book, allowing time to examine the architecture and think, ‘what are they looking at, who are they, and where are they going?” In warm rays of naturalistic light and dressed in nondescript neutral pants and tops, the dancers looked like something between angels and hard-working humans at sunset on a harbor. Perhaps it was the Arvo Part score, which felt both structured and spiritual, that lent to the feeling of divinity.  My personal favorite moment in the piece was a canon facing the back where two dancers, then four, then all on stage dropped to the floor, and all together sharply raised their faces, looking at something off-stage. There was just something in this piece that was otherworldly and felt far away, as if they and the audience were being called to something beyond. The ending, and the way each dancer left the stage, well, I don’t want to give it away in case you see it. It managed to drag out that feeling of emptiness after seeing something beautiful disappear, the presence and light still lingering. The experience of seeing this peice is something I will keep very close to my heart for a long time.

I didn’t have tickets for Saturday’s show, but after the Friday performance, I had to go back.

Saturday was quite different, a little less casual without the audience interaction and explanation of pieces. Three works were on the bill starting with ‘Rise’ choreographed in 1993. The piece featured eight dancers paired boy-girl in jewel-toned pants and tops, emerald-green, garnet, sapphire, and amethyst. each couple, and their movement vocabulary, seemed categorized by color. The garnet duo was the most aggressive, the emerald slinky, sensual, a mix of held and sparkling.Set to music by John Adams, the score felt like storyline in itself, one of a Hitchcock thriller, set in a 1920’s jazz club filled with dangerous vixens and scheming gangsters. The dancers seemed both spontaneous and in perfect control of their bodies, able to stop on a dime, and switch direction, lending to a feeling of plot twists and turns. Battements, enveloppes, and jumps seemed to explode out of nowhere like gunshots. ‘Rise’ was a constant call to action. Ironically, my favorite moment was when all eight dancers began from the ground and erupted into a leap sideways plopping noisily on the ground. So much for rising. It was for me, somewhere between an old Hollywood classic and a comic book- fun, thrilling, and action-packed.

Second was Varone himself in 2014’s, ‘The Fabulist’, about creating or relating fables,true or imagined. This work showed the brilliance of using lighting to create atmosphere. Set to a haunting, mystical score by David Lang, the solo seemed to take place at one moment under a white gleam of moonlight, in another moment, under a shadowed canopy of a dark wood. Intricate hand motions, gesture, and sweeping travelling steps made the solo seem like a tale unfolding or a spell being cast. However, moments of ‘stuttering’ or sudden stops, rigidity, gave a sense of characterization to the Fabulist. Beyond the story woven, the audience could feel a sense of age or forgetfulness, as if deterioration of the mind and body affects even the most magical of presence. 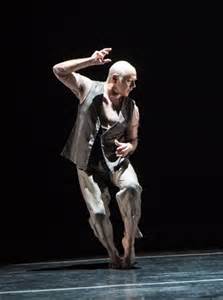 The evening concluded with another newer work, ‘Dome’ created in 2014. The stage was filled in the first half of the piece with glowing orange light that seemed to stretch into an endless desert horizon. Unlike the gestural intricacies of The Fabulist, or the bright flashes and momentum used in Rise, the movement of Dome had stiffness and was more angular. The legs were often bent at the knee, in an attitude, while the arms were either bent in angles or stretched directly to the sides, looking like a weather vane turned with the wind. About halfway through the piece, the movement and music changed, picking up speed. THe background changed to a bluish gray color and the dancers seemed caught in a storm. The piece seemed to me an experience of being subject to unpredictable and dangerous environmental changes. The dancers seemed to work on different planes, as if the surface of the floor would tip and the axis of this world would shift. By the end, the dancers had moved away from the stop-action from the opening and seemed in a hurry, as if to always try to keep ahead of the world rapidly changing underneath their feet. 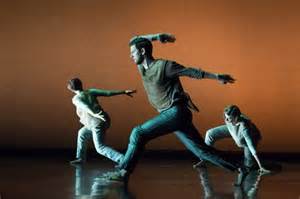 Most of the time, dancers and choreographer seem to have certain specific tools in their toolkits. I know dancers that will say, ‘I can play innocent girlish roles like Juliet, or the pranksters like Swanhilda, but don’t cast me in the sassy parts, like Gamzatti!’ Even non-dancers I think, like to stereotype themselves and others as ‘the ditz’ or ‘the nice guy’, and we all think of situations where these types fit in. You might invite your smart accountant friend to lunch but not to your rave party. The point here is that these pieces covered such a range of character, of communication, of emotion projected and received. These are artists beyond a stereotype, they have every conceivable character within their wheelhouse. This was a weekend of shows akin to walking into a library where every genre every author is available and waiting to be read, and it’s all coming from one excellent and diverse group.

A disclaimer I know that I am describing this show in abstract and personal terms. However, this show was overwhelmingly an experience, not a showcase where I, even as a dancer, felt dazzled by particular steps. Moments where I noticed a high leg or a cool lift, I mostly only remember because I forced myself to notice technique or tried to take stock of the shapes and relationships in an attempt to decipher meaning. I don’t think this is the way to experience a Doug Varone show. I can really only describe it best with how it was, for me, experienced and that was much more through the murky and personal library of images and feeling conjured up from m brain and heart. I am aware that this is bad form in writing a critique, but I also gave you an unneccesary analysis of rat-faced Adam Levine’s singing. You’re welcome dance fans!.

Also, remember this? That blank page?

Thanks to some amazingly generous artists (and my dear friend Ellen who has gone to the Doug Varone summer workshop and knew the dancers, and I awkwardly tagged along when she went to say hi) it’s not blank anymore!