The show began with SEX TAPE, as cold blue light from overhead beamed onto a rectangular red and cream rug center stage on the wooden floor, surrouneed by audience members on three sides. The blinds on the windows behind the performers were down, the dim lighting from Jonathan Cottle allowing for soft shadows. The two performers, Gabrielle Revlock and Michele Tantoco, began coupled on the rug. backround noise of a street scene, indiscint voices and faint traffic sounds sourced from Giusto Pio‘s, “Motore Immobile’ by Revlock, framed the pedestrian feel. The dancers wore everyday clothes, jeans and a sweater on Tantoco, shorts and a tank top on Revlock.

The piece has little sense of time. It seemed suspended, as if interrupting a moment rather than having a clear narrative beginning. SEX TAPE does not feel as if it was made with the intent of pleasure for the viewer, but instead more enjoyable for the performers. It feels like an invasion of privacy but not on anything taboo. Sustained touch is so often reserved only for romantic or sexual partners that it feels vaguely explicit even if it isn’t, perhaps because it seems like it will escalate to something explicit. This was the intimacy of touch without sexuality, without clear roles, without a keyword search.

As the piece evolves, the two performers gently cradle, hug, and caress each other. There is no clear front. Sometimes, as an audience member, we see their faces as they look at each other, other moments they turn away. The movement is filled with tiny nuances, like fingers intertwining. The overall structure progressed slowly, like watching paths of light being refracted, bending as they pass from one medium into another. Those sitting on one side of the room get to see an entirely different piece than those on the other side.  The gaze of the audience calls to mind the process of getting to know the secrets and various sides of a person rather than just the more 2-dimensional face of a screen or a first-impression. What you see depends on where you sit, probably metaphorically as well as physically.

An interesting cross-connection in the human brain relates moral judgments to the physical stimuli of the context in which those judgements are made; we feel more positive towards a person if there is a pleasant smell in the room. There were physical conditions of the space at the Flea which I’m not sure if they were deliberate, that swayed my experience of the work.

It was hot in there, the air felt congested and stifling. Perhaps this is one reason why, watching the two performers, I felt a gross sense of clinginess from the piece. The quietness of the soundscape gave me a supreme fear that I was going to cough or sneeze. As they relaxed into each other’s arms I felt alien in my own skin. I could not wait for it to be over.

This is a work that does seemingly little onstage, but a lot on the psyche. Like the viewing experience dependent on where your chair is situated, reaction towards the piece is likely as independent and contextually related to the context of our own surroundings and hidden inner worlds.

After a brief intermission, the chairs were rearranged so that the audience could sit and talk with each other. A list of ‘36 Questions to Fall in Love from the New York Times’ was provided on the program. We were given a few minutes to mingle with a stranger and choose a few questions to discuss with our new friend.

I really didn’t want to participate at first, but actually enjoyed the conversation with my partner, another dancer named May, once we had opened up and started talking. So, the opposite of most dates that I go on.

We then reoriented the chairs again in traditional audience rows to face a green screen. As soft music by Jake Shimabukuro, edited by Dave Ratzlow played, a group of performers decked in various wedding attire sat in chairs on the side. Revlock, in a strapless wedding gown, led a performative experiment in ‘Nuptial Blizt’, first explaining her initial interest in wedding photography.as storytelling through still images and the found choreography of wedding positions, suggesting what love is supposed to look like. She showed some slides of examples of these positions, such as ‘man leading woman’, ‘head touch’ ‘and lesbian symmetry’.

She then invited each of the additional performers in their suits and wedding gowns, to join her one at a time in front of the green screen, asking two questions:

And after explaining if the photo shoot was intended for two brides, two grooms, or a bride and groom…

A soft female voice recording would then lead the couple through a series of poses complete with compliments like ‘that’s so lovely’, not unlike a real photographer might say. Revlock added different costume pieces, another dress on top of the first, a suit jacket, a giant fluffy bow with each new participant. The realistic guide through these cliched poses was increasingly hilarious as it pointed out gender biases of protector or leader roles, or when the choreography of picture-perfect love didn’t quite suit the performers. In one shoot, Revlock was playing bride to a man much shorter than her, as he stood wrapping his arms around her from behind, only the very top of his head visible over her shoulder.

Photographer, Dave Ratzlow, took live photos, the location suggestions ranging from a forest to the Milky Way to a rough ocean scene from the brides and grooms to be edited over the greenscreen and shared on Revlock’s Instagram. 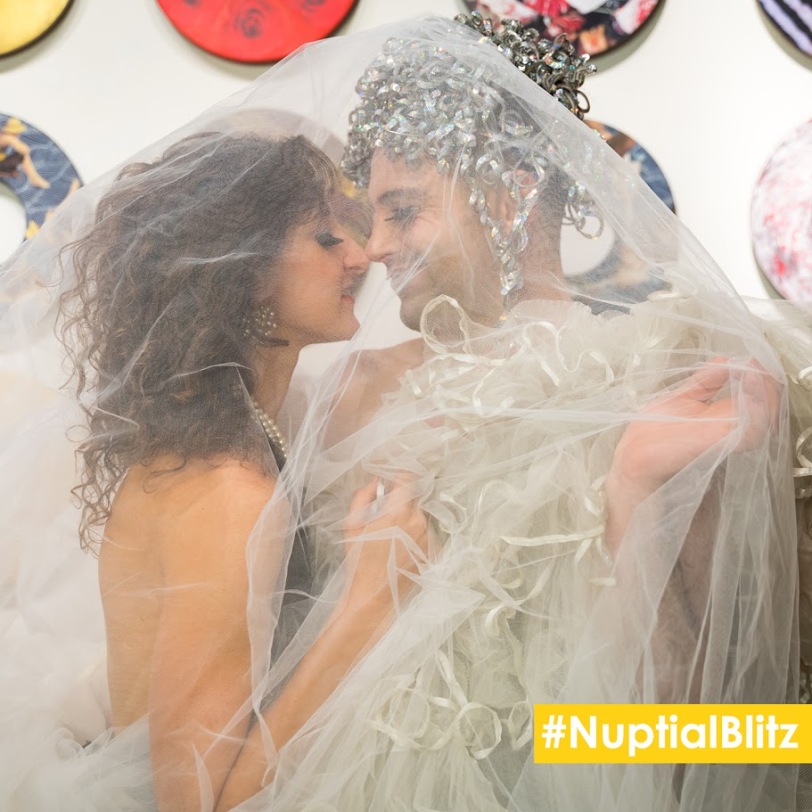 The final shot pulled in extra audience members to play the proud dad, grandma, bridesmaid and toss confetti in the air. It was exactly the prescriptive cliché of love and happiness that society seems to market and reproduce over and over again, but hilarious.

In both works, Revlock manages to twist perspective on these contrasting private and glossy public viewpoints of love to question the look and experience of human relationships- beautiful, hilarious, choreographed, and natural.

Go to @gabrirellerevlock on Instagram to see the Nuptial Blitz photos. They are fantastic. My words here do not do justice to that giant bow that I could not stop laughing at.